Wireworms – we’re just seeing the tip of the iceberg

As damage to field crops is poised to escalate, consider proactively finding a wireworm control solution for your area by submitting samples to a member of Canada’s wireworm research team.

Lindane (e.g. Vitavax Dual, etc.) insecticide applied for several decades to crops on the Canadian Prairies kept wireworm numbers low. Since the ban of this organochlorine pesticide in 2004, wireworm damage in field crops is rebounding. Some entomology researcher scientists say we’re just seeing the tip of the iceberg. 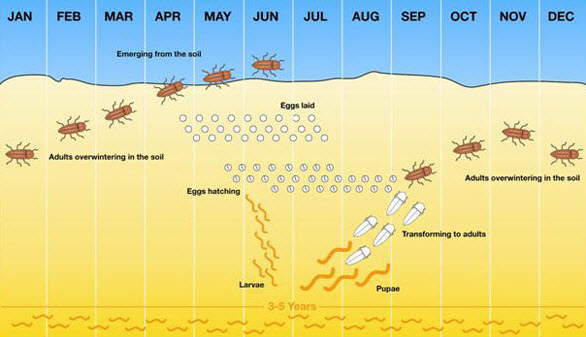 Depending on the species, the worm-like larvae can feed on plant roots and germinating seeds for up to 3 to 5 years before developing into the adult click beetle stage. While current insecticidal seed treatments may repel wireworms for a growing season, their populations continue to increase so that these treatment measures begin to fail. Even these insecticides may be phased out. Clearly, an integrated management method that also applies non-pesticide approaches will be required for optimal wireworm management. 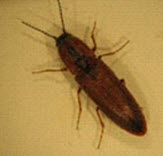 Due to their preference to eat annual or perennial grasses, wireworm populations can build up in fields that have extended periods of cereal crops or pasture. Pulses, oilseeds, potatoes and sugar beets are susceptible to wireworm damage when grown in rotation with cereals. Crops grown in recently broken sod are especially vulnerable. Non-farmed areas like grassy ditches and undisturbed field borders also harbour wireworms and click beetles.

Agriculture and Agri-Food Canada’s (AAFC) wireworm research team is identifying wireworm species and researching new control measures. An integrated management approach includes improved understanding of the contribution of beneficial insects as well as realizing how wireworm communities are affected by various agronomic techniques, including crop rotations. The research team needs to know which specific wireworm species dominates in your farming region so the correct control option(s) can be applied as the problem worsens.

Dr. Haley Catton, cereal crop entomologist of AAFC Lethbridge, is the Prairie representative on this team. The team is asking for producers to submit wireworm species from their fields. Catton and colleagues are writing a wireworm field guide, expected to be released later this year.

Early spring, prior to seeding, is the best time to bait and capture wireworms. Due to a greater amount of soil moisture, wireworms migrate upwards near to the soil surface to ultimately come in contact with the rooting zones of plants in the early spring, when the soil temperature rises above 5⁰C.

Baiting can be as simple as burying a cup of a cereal-based product like flour, bran or wheat seeds to a depth of four to six inches into the soil at marked locations. While wireworms are attracted to the carbon dioxide emitted by germinating plants in the spring, the bait material attracts the worms by mimicking this process prior to plant germination.

Include a brief description of when and where the sample was collected (nearest town or address), information about the crop rotation in the sampled field over the past four years, name and telephone number. Once the species are identified, producers will be contacted with the results.

In the new episode of Fireside Chats with Erin, we have two "Erins" as @GowrilukE chats with @ErinOTooleMP. They discuss trade with China, risk management programs, and O'Toole's vision for Canadian agriculture. Available wherever you get your podcasts and YouTube! (link below).

Join us & @albertabeef on July 29 at the Field Crop Development Centre in Lacombe to hear from industry experts on new barley varieties in the pipeline.

The @AlbertaWheat and @AlbertaBarley Commissions wish everyone a safe and happy Canada Day!

Sign up below to stay in the loop for all barley industry-related news. You’ll always be in the know with Alberta Barley!

Missed a past issue of GrainsWest? Click here to check out our archived PDF versions.