U of A continues world-class barley research

Posted on Aug 3 By: Trevor Bacque 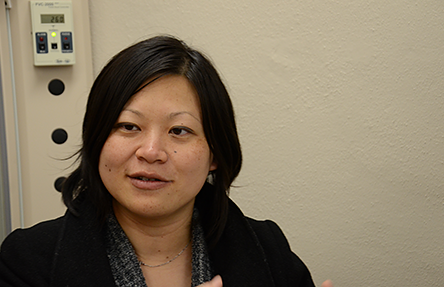 Dr. Lingyun Chen speaks during a recent tour of her laboratory at the University of Alberta in Edmonton.  Credit: Trevor Bacque
The third floor of the Agricultural, Life and Environmental Sciences building at the University of Alberta (U of A) campus is cluttered. Packed boxes of floor tiles lay in wait and unpacked shipments sit on pallets in hopes of eventually being set up.

Among the hodgepodge is Dr. Lingyun Chen’s research laboratory. The 36-year old professor is currently the cereal scientist chair at the U of A and commands a bustling lab of a dozen students and researchers working on post-doctorates, completing research, and developing new and innovative breakthroughs with barley. The chair position is a joint sponsorship between Alberta Barley (ABC) and the Alberta Crop Industry Development Fund (ACIDF). Since 2007, more than $4 million has been invested into Chen’s research.

Dr. Chen has been at the U of A for nearly five years and her research has led her to amazing discoveries, such as the ability to separate barley into base levels of proteins, lipids and starches.

“We are most focused on the protein side,” said Chen, who earned her biopolymer chemistry PhD in Wuhan, China. “When we get the protein, we can convert that into a micro-encapsulation system.”

With modifications and safe processing, Chen will be able to generate new nutritive value in barley. This is largely done through hydrolysis—a chemical process breaking down compounds through a water-based reaction.

A portion of Chen’s research includes looking at ways barley can become a larger player in the consumer market currently accounting for less than five per cent. Many of her discoveries include non-traditional uses for barley, like her mirco-encapsulation system.

Antioxidant peptides prepared from barley protein.  Credit: Trevor Bacque
“She’s very enthusiastic about her area of work,” said Doug Walkey, executive director of ACIDF. “Like most researchers, she’s a bit of a bulldog. She locks onto ideas. She has some great science process knowledge and technology behind her.”

With her unique research being furthered every time she steps into the lab, another one of Chen’s latest discoveries is how to use food-grade barley to replace gelatin capsules.

“In the human stomach, conditions are harsh and lots of acid breaks down gel capsules fast,” she said. “Barley proteincoated capsules would pass through the stomach, and go into the intestine for release and better absorption into the body.”

With many possible applications, Chen and her team have been breaking barley down into its smallest level over the last three years: nanofibres.

When simplified into their nano-state, the fibres’ application can be extended into cosmetics and pharmaceuticals.

“Dr. Chen’s research will give barley a greater presence in crop development and we will grow more barley because there will be so many alternate uses than malt, feed and straight food,” said Linda Whitworth, the Commission’s market development manager.

Whitworth said the possibility of a barley-based capsule for medicine, as opposed to gelatin-based, is very intriguing as increasing amounts of people are vegetarians and vegans.

“Dr. Chen’s research is going to bring forth more applications for using various specific components of barley,” she said. 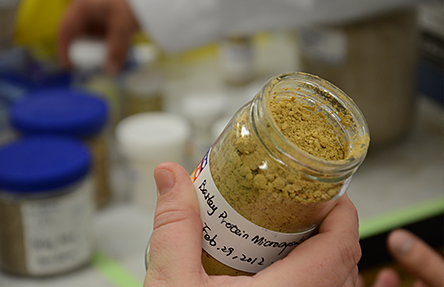 Beta-carotene in barley protein microcapsules prepared from our pilot processing this February.  Credit: Trevor Bacque
The systems and models currently being derived by Chen and her fellow researchers are at a platform level, where products and ideas are developed on a small scale within the lab.

In order to move her research into the marketplace and attract industry, Chen needs to produce large-scale quantities of her products. With $4.4 million in funding announced by Western Economic Diversification Canada this past spring, Chen is going to be able to move production to a new facility that will allow her to do just that.

Locations for this new facility are currently being scouted, enabling Chen and her team to process up to 250 kilograms of raw material daily.

“We have a lot of contacts with industry,” said Chen. “They have asked for samples to try, but they may need 50 pounds of protein to try in their products.”

The new facility will also allow Chen to demonstrate to industry how the process can be scaled up to meet manufacturing needs. The end result could be more value-added processing using barley.

The facility is expected to be operational by the fall. It will include two centrifuges, a wet milling area, high-speed mixers and filtration systems.

Missing summer field days? Join our next #InTheField Webinar! Our host @BoychynJeremy welcomes guest @SheriStrydhorst on June 10 to present on "PGRs on wheat and barley, what you should know." Live Q&A will follow.

Jeff Bronsch from Taber, AB was inspired to pursue his interest in the province’s ag history after reading the @GrainsWest story “Noble effort,” in our winter, 2020 issue.

Barley growers! Chlormequat (e.g. Manipulator) has been registered for barley, but talk to your grain buyer before using this product on malt barley. It may not be accepted if treated. #KeepitCleanCanada #CdnAg @KICCanada

Sign up below to stay in the loop for all barley industry-related news. You’ll always be in the know with Alberta Barley!

Missed a past issue of GrainsWest? Click here to check out our archived PDF versions.